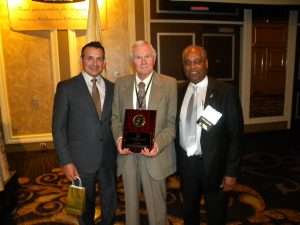 Bob Steinmetz’s experience in the industry spans over 5 decades. He first started working for Robert Hubsch when he was on college break. After college, Bob joined the US Army, and after he was honorably discharged, he returned to the moving industry.

Bob was on the NJWMA board of directors from 1972 to 1994; 22 consecutive years, serving on many committees and various positions, including President.

Bob was honored to be selected by the governor to represent the moving & storage industry as a Board member on the NJ State Board of Public Movers in 1994; Bob stayed on the Board until the Board was disbanded by Governor Whitman for budgetary reasons. Bob also received the NJWMA Lifetime Achievement Award, but he has continued to work in the industry. Bob, we thank you for your dedication, loyalty and tireless support that has helped improve the moving and storage industry for all NJ movers.