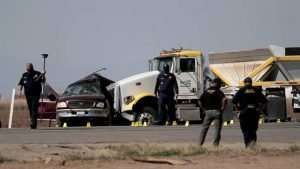 This year should be smooth sailing for Mike Card, president of Combined Transport. The trucking company his dad started in 1980 is busier than ever — trying to meet the nation’s ravenous demand for delivered goods amid a pandemic.

But with some 500 trucks on the road across the nation, Card is constantly thinking about highway safety because just one bad crash could put his company on the brink of bankruptcy.

“If someone wins $20 million from the jury, my insurance companies only pay the first $5 [million]. I would have to pay the next $15 million. We couldn’t afford that. We’d have to shut our doors.” Card said.

It’s not a unique worry.

According to data analyzed by the National Safety Council, just over 5,000 large trucks were involved in fatal crashes in 2019, a 43% increase from 2010. The number of injuries associated with truck crashes rose 7% that year to 160,000, with the majority being occupants of other vehicles.

Jury awards for crashes are also skyrocketing. When considering verdicts of more than $1 million, the average size increased nearly 1,000% from 2010 to 2018, rising from $2.3 million to $22.3 million, according to a study last summer by the American Transportation Research Institute.

US Xpress has about 7,000 trucks. CEO Eric Fuller told CNBC that for comparable accidents, verdict sizes have increased as much as 10 times over the last three or four years.

“When you get into jury trials, there’s very much a feeling of somebody has to pay for this. And it’s often it’s the big pockets,” Fuller said.

In lawsuits that went in favor of the plaintiffs, hours-of-service violations, lack of clean driving history and fatigue were commonly cited factors.

The trucking industry sees them as unfairly punitive, biased against transportation companies and brought about by aggressive attorneys. It points to high-profile accidents that have resulted in massive verdicts against trucking companies, even when passenger cars are clearly at fault for the accident.

One of the largest stemmed from a 2014 crash in Odessa, Texas, involving Werner Enterprises. During a winter storm, the driver of a pickup truck lost control and crossed the median, striking a tractor-trailer head-on. The accident killed a 7-year-old passenger and seriously injured three others. The family successfully sued and was awarded $90 million. The case is currently under appeal.

“If an accident like this is the fault of the driver who was hit by the out of control vehicle, think about what that means for every motorist on the roads,” Werner Enterprises said in a statement.

“In most states there’s a disconnect between your level of negligence and your level of liability,” said Dan Murray, senior vice president of the  American Transportation Research Institute. “There are states where you can be identified as 10% or 15% negligent and still be vulnerable for 100% of the financial liabilities.”

Said Fuller: “That’s really the kind of stuff we want to fix in tort reform.”

The insurance and trucking industries are lobbying federal and state lawmakers for lower caps on settlements and more restrictions on where, when and how often plaintiffs’ attorneys are permitted to file lawsuits.

They appear to be gaining headway in several states including Texas and Iowa, where bills aimed at limiting a company’s liability or verdict sizes are working their way through state legislatures.

And while expensive litigation, jaw-dropping verdicts and settlements are driving up the prices for of all kinds of insurance, for small and medium-size trucking companies the price hikes on liability insurance are becoming unaffordable. 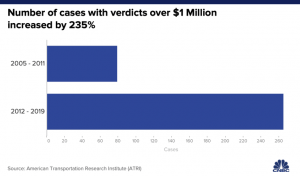 The commercial trucking market has experienced unprecedented increases in commercial insurance rates over the past two years averaging 20% – 25% annually, according to Craig Dancer, U.S. transportation industry practice leader for Marsh & McLennan, the world’s largest insurance broker. He said the price hikes also usually come with an increase in the deductible trucking companies have to pay.

According to Murray, the smaller operators think, “If the deductibles are too high, or the insurance premium gets too high I will scale back the amount of coverage I have.”

“That’s not even close to covering the cost for a lot of these accidents,” Fuller said. “So we’d really like to see the insurance minimums go up.”

But the cost of insurance is already a top concern for smaller companies, according to Todd Spencer, president of the Owner-Operator Independent Drivers Association. He says the push for higher minimum coverage could drive smaller operators out of business.

“There are proposals on the table that would pretty much increase the minimum required right now by a factor of five. And that would be the death knell for many, many small business truckers,” he said.

Card says trucking companies try to pass on costs to their customers in the form of higher shipping rates.  “But they’re also struggling. They’ve got their costs going up, and so they’re pushing back on us to not raise rates.” He says the companies largely end up eating the costs.

But a decision to forgo more coverage is also a gamble, putting a company’s survival on the line.

Said Combined Transport’s Card: “We’re struggling to get excess insurance. Getting $5 million or $10 million of insurance has been so expensive that we can’t even afford to buy the extra insurance that we’d like to have.”

That’s the insurance coverage that would protect Card’s company in the event of a severe accident. Without it? “It would be catastrophic for our company. We’d lose. And all of our employees would lose their jobs,” he said.