The board of directors for the Unified Carrier Registration Plan has approved an aggressive three-pronged strategy to identify and contact unregistered motor carriers.

There are up to 44,000 motor carriers who have not registered with the plan, failed to pay their fees or have been issued penalties for past violations.

In a telephone conference on Aug. 12, the board authorized three pilot projects that call for hiring a private contractor to contact, attempt to register and collect fees mostly from errant carriers from the nine nonparticipating UCR states to raise funds for the plan.

Created by Congress in 2005, the UCR Plan and the 41 states participating in the UCR agreement establish and collect fees from interstate motor carriers, private carriers of property, brokers, freight forwarders and leasing companies — and then dish out the more than $100 million in safety enforcement programs annually to the participating states. 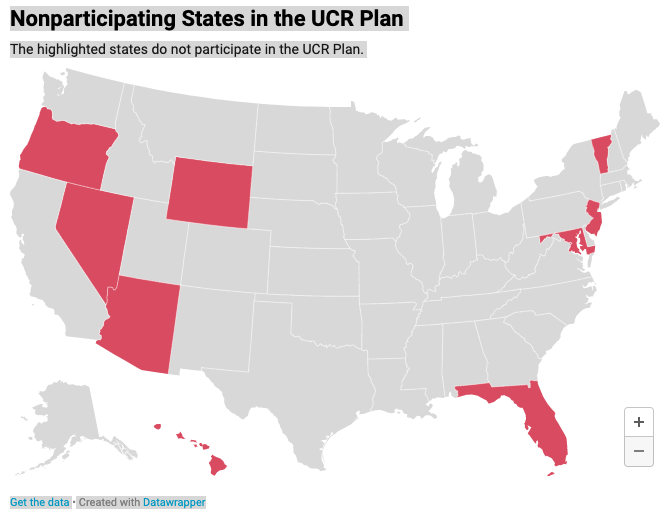 Carriers based in Canada and Mexico that operate in the U.S. are also subject to the UCR agreement, but private carriers of passengers are not included in the categories subject to UCR fees.

The registration fees are graduated based on the number of trucks a carrier has in its fleet. For instance, carriers with up to two trucks are currently paying $59 annually; carriers with a fleet of 1,001 or more trucks must pay $56,977 in fees annually.

“We agree that great headway can be made if we contact those carriers in this pilot and attempt to register them,” Gutierrez said of one of the pilots. “So the plan is to have one contractor full-time equivalent contact the motor carriers — about 50 a day — starting with those with the highest number of power units and moving to those with lower numbers of power units, to be more efficient in our return.”

For the first pilot, Gutierrez estimates 20% of those carriers contacted — raising about $450,000 in collections — at a cost of about $85,000 for the contractor.

A second pilot will focus on an estimated more than 5,600 new carrier entrants in nonparticipating states who have failed to register. Some of them may be unaware that the registration is required, officials said. Those new collections could raise up to $383,000, according to Gutierrez.

A third pilot would target those motor carriers who have received a violation for not registering. There were an estimated 1,800 violations issued so far this year, a pace that could lead to about 3,500 motor carriers in violation by the end of the year.

In addition, Gutierrez said the UCR Plan currently has a pilot project focused on contacting motor carriers that report a number of power units that contradicts the number of power units declared on their MCS-150, a Federal Motor Carrier Safety Administration form requiring carriers or brokers to define the type of their business operation they plan to establish and other detailed information.

But, he added, the new pilot projects “would be the first step of the board in taking action on the enforcement side of the registration equation.” None of the new pilots would be focused on brokers or freight forwarders, officials said.